Our April 3 Membership Meeting is Cancelled.

The COVID-19 crisis and resulting closure of Oakton’s campus makes it difficult to conduct elections as planned.  The AFA Elections Committee is currently working on a plan to hold the AFA Board Elections and NEA-RA representative elections in a timely manner while still abiding by the bylaws of the IEA, NEA, and AFA.  Election dates and voting methods will be posted here and publicized via email as soon as they have been finalized.

We wanted to let you know that we are thinking about you. The Adjunct Faculty Association board members are doing our best to advocate for your health (both mental and physical) and to protect your rights as faculty members.  We have been in touch with many members of the administration and the full-time faculty union.

Unless you are already teaching on-line, the rapid move to on-line teaching clearly adds a layer of uncertainty.  To begin the transition to on-line teaching, please immediately fill out the technology survey sent out by John Wade to let the college know exactly how much access to technology you have.  Here’s the link to the survey.

We also recognize that many faculty are over the age of 60 or have other health challenges.  Others adjunct faculty may also now have children at home, making working from home even more difficult.   We also realize that some of you are not big users of D2L and may have no experience teaching on-line.  We are doing our best to advocate for you on all fronts.

For those of you who are librarians, tutors, and coaches there are other questions about compensation.

The college has established an email to send questions:  coronavirus@oakton.edu

If you email them, please copy the AFA at afaoakton@gmail.com so we can try to track responses for everyone.

We honestly believe that the administration is working in good faith with all our best interests at heart.  Yes, mistakes have been made and communication not as clear as it could have been, but the administration has never faced anything like this themselves.  These are days to be gentle with ourselves and each other.

Please feel free to forward this to other adjunct faculty members, as our list is incomplete.

Please also communicate with us about any other issues we might be overlooking.  CLICK HERE FOR ADDITIONAL RESOURCES.

Take care of yourselves,

The April 3rd Meeting has been CANCELLED.

Chronicle of Higher Education: Going Online in a Hurry

Please Do a Bad Job of Putting Your Courses Online 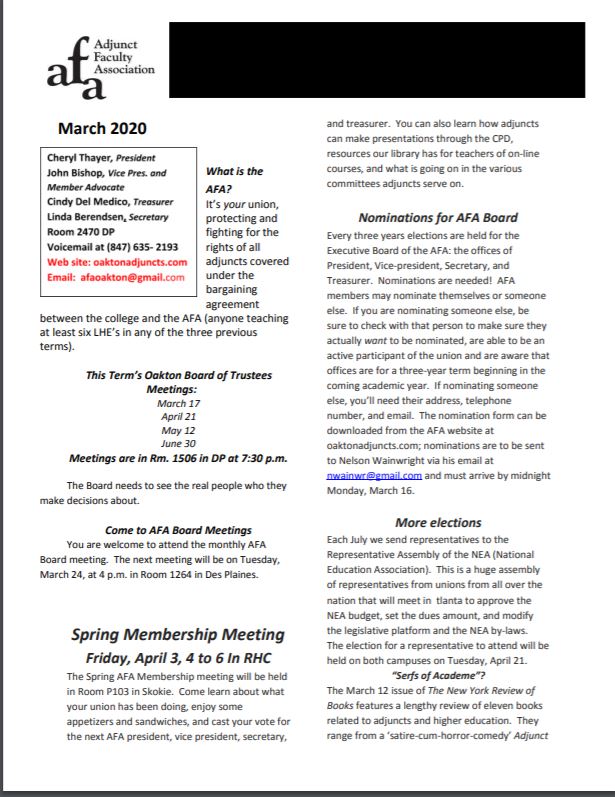 Come to AFA Board Meetings You are welcome to attend the monthly AFA Board meeting. The next meeting will be on Tuesday, March 24, at 4 p.m. in Room 1264 in Des Plaines.

Spring Membership Meeting Friday, April 3, 4 to 6 In RHC The Spring AFA Membership meeting will be held in Room P103 in Skokie. Come learn about what your union has been doing, enjoy some appetizers and sandwiches, and cast your vote for the next AFA president, vice president, secretary,

and treasurer. You can also learn how adjuncts can make presentations through the CPD, resources our library has for teachers of on-line courses, and what is going on in the various committees adjuncts serve on.

Nominations for AFA Board Every three years elections are held for the Executive Board of the AFA: the offices of President, Vice-president, Secretary, and Treasurer. Nominations are needed! AFA members may nominate themselves or someone else. If you are nominating someone else, be sure to check with that person to make sure they actually want to be nominated, are able to be an active participant of the union and are aware that offices are for a three-year term beginning in the coming academic year. If nominating someone else, you’ll need their address, telephone number, and email. The nomination form can be downloaded from the AFA website at oaktonadjuncts.com; nominations are to be sent to Nelson Wainwright via his email at nwainwr@gmail.com and must arrive by midnight Monday, March 16.

More elections Each July we send representatives to the Representative Assembly of the NEA (National Education Association). This is a huge assembly of representatives from unions from all over the nation that will meet in tlanta to approve the NEA budget, set the dues amount, and modify the legislative platform and the NEA by-laws. The election for a representative to attend will be held on both campuses on Tuesday, April 21.

“Serfs of Academe”? The March 12 issue of The New York Review of Books features a lengthy review of eleven books related to adjuncts and higher education. They range from a ‘satire-cum-horror-comedy’ Adjunct

(our lives in a nut-shell?) to The Meritocracy Trap: How America’s Foundational Myth Feeds Inequality, Dismantles the Middle Class, and Devours the Elite. For those of us who still have hopes of a full-time position, the article notes that in 2017-2018, there were an average of 122 applicants for every tenure-track position open, in a system resembling “a lottery.” It states that the most obvious cause of adjuncts’ lack of security and poor salaries is the ‘decline in public support for higher education,’ noting that the state investment for each student fell by 26 % between 1990 and 2010, so that the wide gains in salary and working conditions gained by unions hardly keep up. Meet the Trustees You will have a chance to meet and talk with the Oakton Board of Trustees at a reception organized by the AFA. Administrators too often attend. It will be in Des Plaines before the regular Tuesday evening April 21 Board meeting. It is a rare to chat with the Board members one on one, to share your views and to hear theirs. More details to come next month.

Paper vs Screens The current issue of on-line AdjunctNation features some research on comprehension differences between reading on paper vs reading on digital media. Students certainly prefer reading on their screens, and of course there are benefits to less use of paper. However, in three studies, students were asked to read text in print and on a device. They were then asked to report the main ideas of the reading, list the key points, and give any other information they thought was important. They were also asked how well they thought they had done. They did indeed read faster on screens and felt that their comprehension was better. When questions were general – questions such as what the main idea is – the students’ comprehension was better

on the screens. On the other hand, when students read the printed texts, they comprehended more when asked specific questions.

Email your senators Email your senator to support S. J. Res. 56, a bipartisan resolution introduced by Dick Durbin that has passed the House in Washington and is now headed to the Senate. According to NEA, this bill would undo Betsy DeVos’s policy of making “it more difficult for students defrauded by unscrupulous colleges to cancel their federal student debt.” If passed by the Senate, it will take effect on July 1 of this year. DeVos’s policy puts the burden of proof on students and ends automatic loan relief for students whose colleges close before they graduate.

The election for the Adjunct Faculty Association (AFA) Board positions will be held
at the spring member meeting on Friday, April 3rd , 2020.
You may submit a nomination for an AFA member for one of the AFA board
positions: President, Vice President, Secretary or Treasurer
Nominations must include the following information.
Nominee’s Name: ____________________________

Send this information to Nelson Wainwright, via email – nwainwr@gmail.com
by Monday, March 16, 2020.

A member may either nominate a colleague or himself/herself for a board position.

The Elections Committee recommends that if you nominate someone else, be sure
 the nominee wants to be nominated,
 the nominee can be an active participant in AFA activities, and
 the nominee knows that the term for a board position is 3 years.